Reflections on a 30 Day Challenge

During the month of February, and early March, The Village Yogi hosted a "Live-Your-Yoga Challenge". 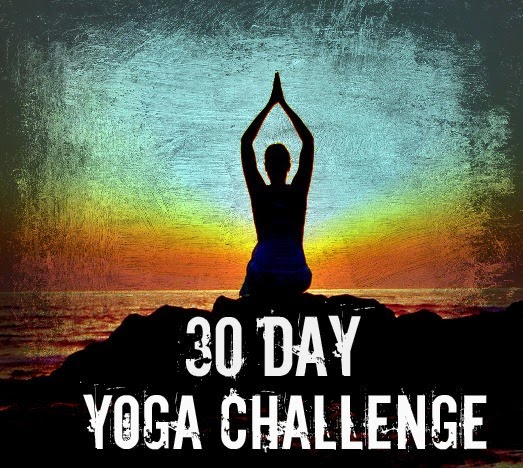 There was really no additional charge for this Challenge - with the exception of the regular monthly membership fee. Plus - Challengers received discounts on the variety of Special Events that were offered at the studio as part of the Challenge - including Partner Yoga, a Live Music Class and an Ayurveda workshop & yoga class. Plus all us teachers did our best to keep fueling participants with positive reinforcement.

The concept: participants who willingly entered The Challenge were encouraged to try to come to 30 classes in 30 days. At The Village Yogi, this is not difficult to do as classes are held every single day. Seven days per week! And the schedule is quite varied - offering a balanced mixture of both rigorous and gentler classes. As well as weekly meditation and softer Yin Yoga classes. So, truly, practicing every day, (or even multiple times a day as many people did!) is easy and actually quite enjoyable.

The point: To ease yourself out of your winter rut, commit to doing something healthy for yourself every day, & to experiment with what it means, and what happens, when you commit to a regular yoga practice. Also - to use the powerful tools that Yoga offers us to illicit positive lasting changes within you, and in your life. Really, "the point" is to take your power back and realize that you are in fact, waaaay  more in control of your well-being than you realize. Yoga practice can be extremely transformative. That's why we asked each of The Challengers to be very mindful with their thoughts over the course of the month. As well - we had each person choose for themselves a Sankalpa - much like a "personal mantra" this short, powerful, positive statement was repeated (silently) at the beginning, and throughout, the classes. Participants were encouraged also to bring their attention to their Sankalpa throughout the day as well.

The result: Over 20 brave souls signed up to take part in this 30 Day Challenge. 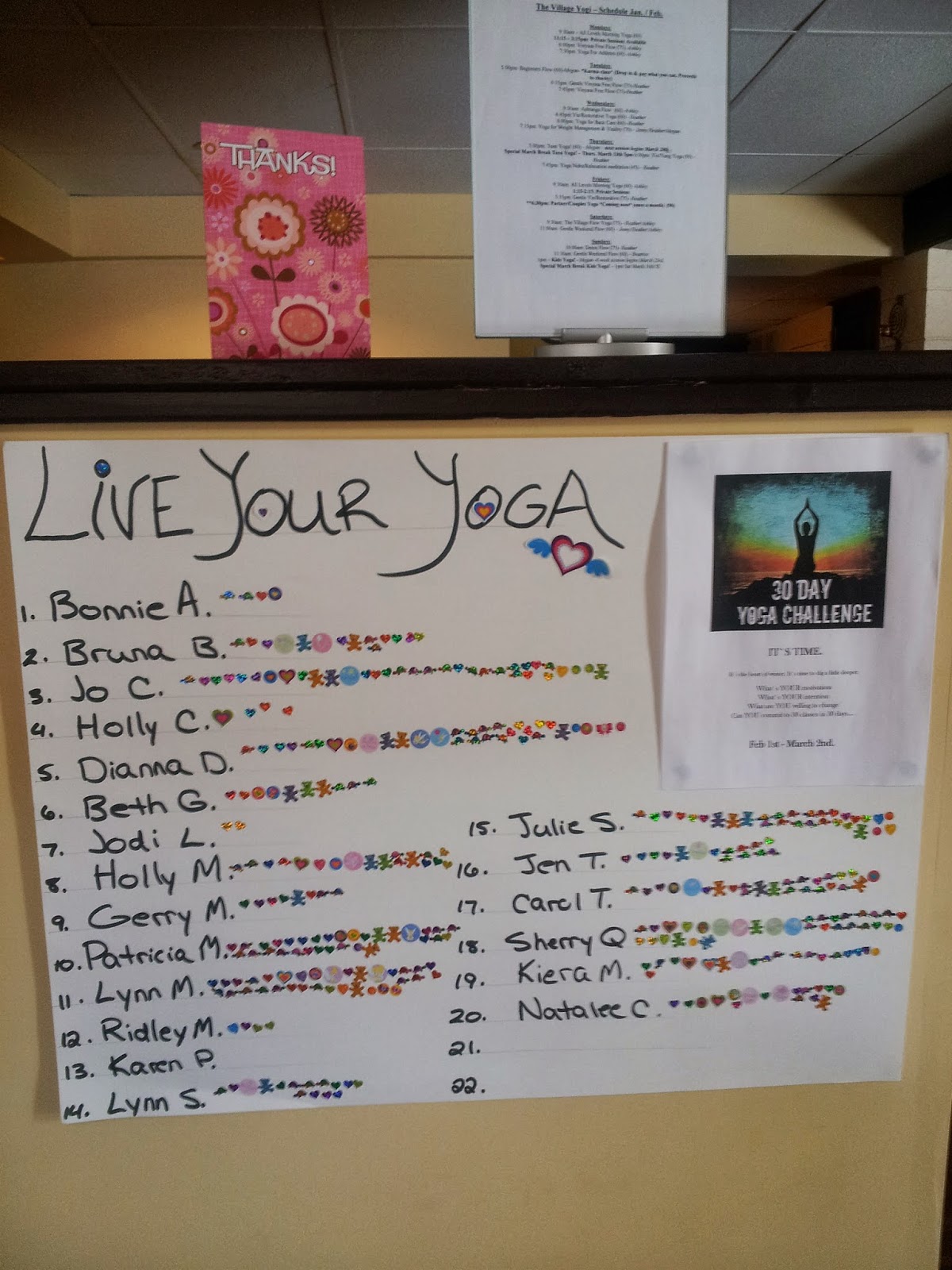 Many of them were brand new to Yoga. And almost all of them surprised and delighted me. I was inspired by their dedication. It was remarkably palpable how much more alive and vibrant the studio felt! And - I was witness to multiple incredible transformations.

There is something very powerful about stepping out of the rat race, if even for an hour each day, and connecting with yourself in a way that is kind and positive. Or, at the very least, if you can't seem to muster any"kindness & positivity" on certain days...at least you've made the effort to do something healthy for yourself to redirect some energy instead of pulling a 6 hour shift at the local pub.

There's also something amazing about choosing this mantra or a "power statement" and continually making an effort to re-focus your mind on that. Imagine - if the majority of society took time each day to focus on a steady breath as they moved their body, with awareness, through a series of sequences designed to build stamina, grounding, heart opening and flexibility. Or - to simply move mindfully throughout their daily tasks.  Just the act of being with yourself, honestly, every single day...without running away from the anxieties in your head, or numbing yourself out to the horrible self image you have.....just showing up...every day...to listen to, take care of, and re-align yourself.... is powerful beyond measure.

What really struck me was how light people seemed to get. I mean, you could see it on their faces; hear it in the tone of their voices. An obvious lightness of being. Several people actually shared with me that their Sankalpa - the personal mantra they chose - seemed to be actually changing things in their life. One woman's mantra had to do with her anxiety and incessant worrying which causes a host of anxiety and fear-related problems for her. Her Sankalpa was something to the effect of: 'I now relax and trust the process of life.' Interestingly, about half way through The Challenge this woman told me about a situation she found herself in whereby she was in public at a function with a lot of people and actually was able to see, feel and know that SOMETHING was changing within her. After a potentially embarrassing fall on a slippery floor she was immediately able to see the symbolism in the 'lesson' and not completely crumble in devastation. Instead the incident became part of her reflections and her meditation. She was able to gain great insight and tremendous personal power from something that, in the past, would have sent her reeling for weeks.

But the most amazing part of The Challenge, for me, came at the end.

There were, of course, prizes offered for people who accumulated 30 or more classes throughout the month. Each person's name was entered into a draw for the grand prize of a 60 min massage (@ Advanced Health Massage Therapy here in Fonthill) a 25 class pass ($275. value) & a handmade candle.
The draw was done randomly by one of our instructors. I was so happy to see that the woman who won was one of the people who were incredibly committed and actually attended far more than 30 classes in those 30 days.

Ironically, this woman first came to The Village Yogi with some trepidation. She had been injured in another yoga class by an aggressive adjustment she received by another teacher. So she was a little nervous about her ongoing injury. As well - this woman was the same woman who nearly had a panic attack in her first Yoga Nidra (meditation) class. I have never seen ANYONE ever flee a yoga class as quickly as she did after that one. It stressed her out SO MUCH. She actually told me later that the more I asked the students to "relax" the more intensely stressed she felt...to the point where she could barely stand it. I thought for sure after that night I would never see that woman ever again. It happens. Sometimes people just aren't ready for what they find within their own stillness.

However, much to my surprise, this woman started coming every single week to that meditation class. Hardly missed a session! That, in itself, was pretty remarkable. But when she started bringing her husband I was even more surprised!! She approached it like a Challenge...something she was really curious about. In fact, she was quite honest about it saying things such as "I don't know why I found it so difficult. But I am determined to master this." I giggle to myself.. As this is similar to how I was when I first started to practice Yoga & Meditation. Plus - it says a lot about this woman. She didn't run, or hide, or flee. Instead - she came back, again and again. She kept exploring, kept experimenting. And isn't THAT what life is supposed to be about?!

Well I was just thrilled when she won the grand prize of The Challenge. Thrilled because she is truly someone who has worked so hard and who embodies so much of what Yoga truly is about. As if to prove that, yet again, she showed up to retrieve her prize but instead reached into the bag and took out the 25 class pass and handed it back to me! She said - "I want to Thank You. This was really amazing for me. I've gotten so much out of this and I'm so proud of myself! I want you to give these passes to someone else - give them to someone who can't afford to come here. " Then she handed me a cheque, for her and her husband's next 3 month membership. Paid in full.


That kind of truthful generosity does not happen very often. I was floored. And have actually been deeply inspired by her gesture every since. I am going to donate the class passes to something or someone who really needs or wants it and may not otherwise be able to afford it. As per her request...I will pay it forward.


Aaaaaaaannnndddddd.....my faith in humanity is once again restored. Thank You Lynn. 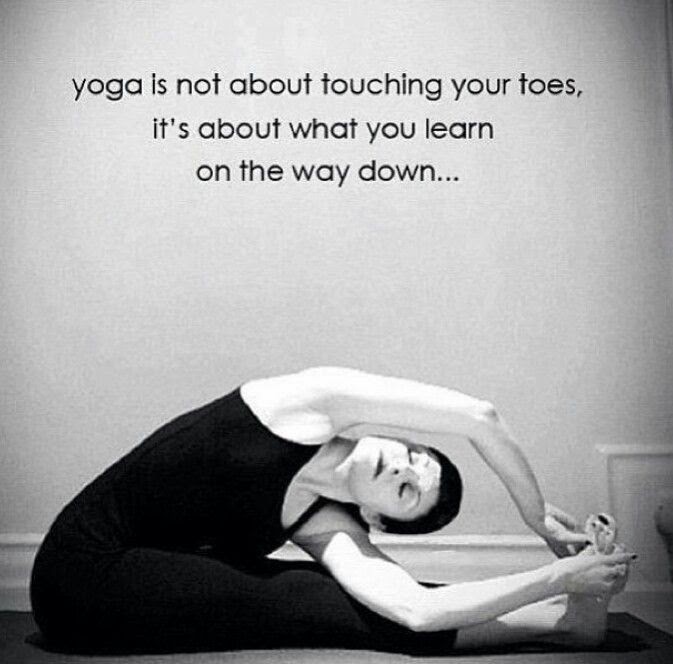