35 years ago today a wonderful woman named Margaret Jones, and her husband Bob, had a bouncing (well, maybe not bouncing...) baby girl. They decided to call her Heather which, personally, I think is a bit of a boring name - but whatever.

It wasn't an easy pregnancy, nor was it an easy birth. But, against all odds (literally) this fiesty lil' dragon spirit was born. Little did Bob & Margaret know what kind of task lay before them in raising their only natural born daughter. Because Margaret was told she couldn't, ever, have children; they had adopted another little girl (whom they named Maureen) 6 months previously. When Margaret first found out she was pregnant the doctors urged her not to "get too attached" because she probably wouldn't carry the baby to term. But, despite the not-so-postitive prognosis, Margaret prayed and wished and prayed and wished and was so very careful for those 9 months.......

When lil' Heather was born, she was what might be described as a somewhat "high maintenance" child. A reluctant and somewhat resistant spirit, right from the beginning.....

At 7 months, after a few days of stillness in her belly followed by some uncomfortable distress that led to a visit to the Emergency Room, Margaret was told there was no heartbeat and her foetus may well be stillborn. Given the precariousness of the pregnancy, this shouldn't have come as a "surprise" . But Margaret was devastated and called her husband immediately. By the time Bob made it to the hospital Margaret was, understandably, very upset. More tests were run and, miraculously,within a few hours a heartbeat "re-appeared"; without any explanation. Hmmmm....how curious. If I didn't know any better I'd think that little being was really trying hard to make up it's mind whether or not it actually wanted to be here in this crazy f-ed up world.

Despite her boring name, baby Heather was anything but. Right from the beginning there seemed to be challenges. Oddly, the baby seemed to be born with one foot behind it's head! Clearly the medical community was confused and somewhat taken aback by this early display of what would later be known as the yoga asana "compass posture".

So - on June 1st, 1976 at 1:31 in the pm so began another chapter in the quirky not-so-remarkable (yet oddly extraordinary) lives of the Jones family. Bob & Margaret certainly had their work as parents cut out for them. Raising two girls - just 9 months apart - became what would later be described as the adventure of their lives. Between the recurring hospital visits, two intense spinal surgeries and subsequent 12 years of orthopedic back braces with their youngest one (boring Heather) - there also came the delicate task of raising both girls with such different needs, backgrounds, genetics, personalities and karma. Everyone knows that parenthood doesn't come with a manual. It's a beautiful, scary, exciting and unique journey upon which everyone must ultimately find their own way.

And if there was ever an award, or special recognition, that was to be given - Bob & Margaret Jones of Welland Ontario should really be given the gold ribbon, or the biggest trophy, or just a big huge THANK YOU for their work as parents. As far as I'm concerned, they are both an absolute living example of the divine qualities of unconditional love, patience, stamina, courage and selfless service.

I am so grateful for my life. Mom & Dad - good work. Happy Day of Birth to you both. I love you. 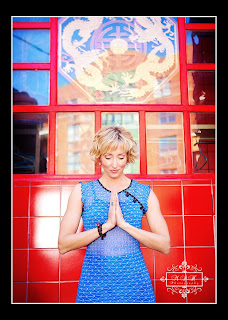