An Eye For An Eye

I awoke filled with mixed emotions this morning.

The news late last night was that Osama bin Laden had been found and that President Obama had ordered, and succeeded with, his assassination. This terrible man has killed thousands, with his proclaimed “war on America” and was the idiot behind the September 11 2001 terrorist attacks in NYC. He has been eluding capture for over a decade now and was finally killed in Pakistan by United States military forces. President Obama has said that “justice has been served.” And that this is a “great victory” for America.

The images of the Sept 11 suicide bombings of the Twin Towers are still etched, horribly, in many of our minds. The aftershock can still be felt in waves of fear and currents of grief whenever we are reminded of that horrible day and, I’m sure, whenever New Yorkers pass by Ground Zero, the site of the bombings. There’s no doubt that this man succeeded in terrorizing a nation. President Obama has said: “Bin Laden’s demise should be welcomed by all who believe in peace and human dignity. The US was not at war with Islam, but terrorists.”

Part of me agrees with this. I feel for the people who lost their families, their loved ones. I am sick at the thought of the suffering that this monster has created and the paralyzing fear that has been felt across the continent as a result of his actions. Yet another part of me is even more worried. When does it end?! Does it ever end??!

Bin Laden’s assassination is not going to end this ‘war’. My prediction is that it’s going to make things even worse. All of bin Laden’s followers, which there are many, are now going to be outraged. There will be an uprising and the only outcome of such a thing is more anger, more terrorizing, more fighting. It seems like an endless cycle. Bin Laden kills our innocent civilian people, Obama kills bin Laden. Now bin Laden’s followers are going to be seeking justice and fueled by even more rage and hatred towards America so they start killing more innocent civilians. So once they retaliate, Obama then orders more retaliation from the American side. It just goes on and on. And that makes me very sad.

US officials have released this statement this morning: “Given the uncertainty and volatility of the current situation, US citizens in areas where events could cause anti-American violence are strongly urged to limit their travel outside of their homes and hotels and avoid mass gatherings and demonstrations.”

My heart is heavy. I feel nervous about what this may lead to.
Yet I also believe in the power of prayer and I know how powerful thoughts can be. So I think the most important thing that anyone can do right now is send thoughts of peace and hold an image of safety, security and protection around our soldiers and politicians, the innocent civilian citizens, our loved ones and around our own nation. Now, more than ever, I think we all have a responsibility to practice peace – in our families, our communities and in our relationships.

Everything in the Universe exists in opposites. It’s the eternal natural Yin/Yang – with night & day, male & female, darkness & light. Without war and fighting, we would never truly know peace and security. So, in one sense, it is a necessary evil. In another sense – most of our jobs are not to be in the front lines of such extremes. So, what we can do is become stewards of love, calm, forgiveness and generosity at the level of our own families and within our own towns, our own communities. The reality of war is not going to go away anytime soon. But, within our own lives, we can each make commitments to release our negativity, our anger and our own need for revenge. Instead, we can practice placing our thoughts on peace and aligning our actions with the higher ideals of harmony, unity and reconciliation. This is the way to create change. 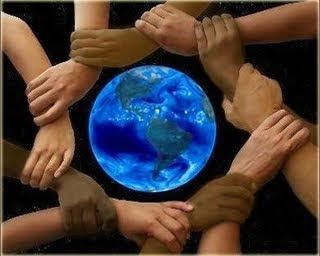